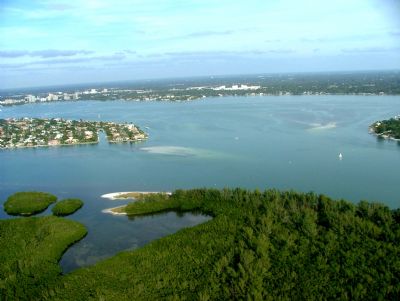 Sarasota Bay is an estuary located off the west coast of Florida.

Sarasota Bay and its watershed appeared on the earliest maps of the area, with the name Zarazote on one dating from the early 18th century. Hunting in the area had supported native populations for more than ten thousand years as Florida attracted some of the earliest human settlements in the hemisphere. Following the retreat of the glaciers, ocean levels rose creating the current coastline and the natural bounty of Sarasota Bay provided food for inhabitants for over five thousand years before Europeans began exploration of the area in 1513 and later, establishing settlements along its shores.

Today, The Sarasota Bay watershed covers almost 50,000 acres across both Manatee and Sarasota Counties. The area’s history of land development and associated flood control measures dates back over a century. Today 75% of the watershed is developed and dominated by medium and high density residential and commercial land uses. Most of this development occurred before stormwater regulations were implemented in 1982, so stormwater from most of the watershed flows into the bay without treatment. Protecting water quality begins with decreasing stormwater runoff to limit the amount of freshwater, sediments and pollutants entering the tributaries and bay. The primary challenge for Sarasota Bay will be designing and implementing solutions for retrofitting stormwater systems to detain, delay and treat run-off. Important initiatives to consider include the feasibility of a stormwater master plan and centralized stormwater management; motivating neighborhoods and homeowners to take individual action; and opportunities for collaborations and partnerships.

When excessive nutrients reach bay waters, phytoplankton block sunlight and seagrasses decline. Nutrient criteria have been set to protect and restore seagrass acreage. Nutrients reaching the bay from wastewater have been dramatically reduced but stormwater remains a troubling source of nutrients. We need research to better understand nutrient dynamics in local bays including the roles of legacy nutrients in the sediments, and the relationships of phytoplankton, macroalgae and seagrass.

In many bayfront neighborhoods old infrastructure delivers untreated stormwater directly to the bay. Retrofitting with bioswales and rain gardens to capture and percolate the first half inch of rain could greatly improve reduce the impact of this stormwater.

The urban core of downtown Sarasota sends untreated stormwater to Hudson Bayou. The City should create a stormwater master plan borrowing ideas from Englewood’s Low Impact Development Project and other proven techniques and include stormwater management in all of its downtown reconstruction projects.

In 1989 with the designation of Sarasota Bay by the US Congress as an “estuary of national significance”, the Sarasota Bay Estuary Program was established and comprehensive restoration and protection of the bay began. Restoration and protection is currently measured against regulatory targets for water quality with the health of seagrass beds serving as the main indicator. Protecting water quality begins with decreasing stormwater runoff to limit the amount of freshwater, sediments, and pollutants entering the tributaries and bay. The primary challenge for Sarasota Bay: designing and implementing solutions for retrofitting stormwater systems to detain, delay and treat run-off. Is it feasible to master plan and centralize? If not, how can we motivate neighborhoods and homeowners to take individual action and what are the opportunities for collaborations and partnerships?